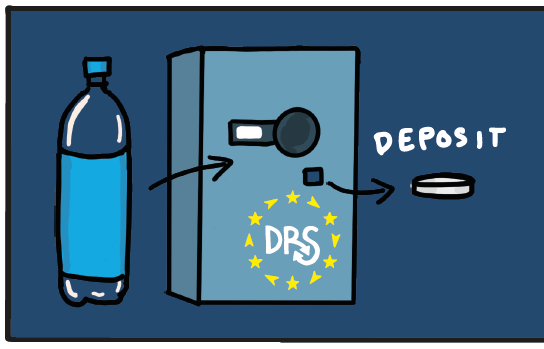 A deposit return scheme (DRS) for the packaging  is a system in which consumers pay an additional amount for the packaging itself, which they can return when they go back to the store or other place where there is a possibility of refund (see picture below) . Thus, the end customer is financially motivated to participate in the system. Collection of packaging and refund of deposits at points of sale can be done manually or via automatic machines. These machines are a more expensive option, but they have the great advantage that they can use sensors and read the bar code from the packaging to sort it according to the brand, type of material and color.

The deposit return scheme (DRS) shifts the burden of paying waste management costs from taxpayers to producers and consumers and represents the practical application of the “polluter pays” principle, which is one of the basic principles in waste management legislation. As can be seen in the picture above, DRS is a closed system in which materials circulate. Thus, DRS enables the transition to a circular economy, because the materials do not end up in waste or in nature, but can be used in several production cycles, thus preserving the value of natural resources. In the new EU directive on single-use plastics , DRS is explicitly recommended as a tool for meeting packaging collection measures.

There are a number of benefits that this system brings. First of all, the introduction of DRS solves environmental problems by preventing plastics from ending up in nature or in landfills. The system enables a high degree of collection of beverage packaging, which results in a significant amount of quality recyclable material. Increasing the level of recycling also enables the creation of new jobs. In addition, the implementation of DRS enables the fulfillment of the goals of the EU directive for single-use plastics, which requires the collection of 90% of plastic packaging by 2029. Finally, the system enables cost savings for municipalities through reduced expenditures for waste collection, treatment and disposal, but also through reduced expenditures for solving the problem of clogging sewers and the like[1]. On the other hand, the downside of DRS is expensive implementation. Automatic machines for collecting and sorting packaging cost up to 15,000 euros. Also, some critics question whether the DRS is an adequate system for the implementation of the circular economy, given that it depends on waste, while the circular economy aims at “zero waste”. Those who advocate this view are more supportive of reuse schemes.[2]

Currently, only 8 countries from the EU-28 group have implemented DRS. The table below chronologically shows the EU countries that have introduced the DRS. Also, in order to show the relationship between the implemented DRS and increase the recycling rate, the table additionally contains data on the movement of the recycling rate of plastic packaging in the period from 2006 to 2017 in the given countries.

Based on the year of implementation, it can be clearly concluded that the Scandinavian countries are pioneers in the implementation of DRS, which in the eighties and nineties of the 20th century managed to establish this way of collecting packaging. It is also noticeable that a large number of European countries have not yet adopted this system. This suggests that the introduction of this system is complex and requires the determination and strong political will of decision-makers, as well as the motivation of the private sector. These challenges will be described in more in the next post, where an example of DRS implementation in Germany will be presented.

What is also noticeable in the given table is the fact that all countries with this system have a very high percentage of collected plastic packaging in 2016, ranging from 84.9% in Sweden to as much as 98% in Germany. In addition, it can be concluded that in six of the eight countries with DRS implemented, there has been a double-digit or three-digit increase in the packaging waste recycling rate in the last 12 years. However, in Estonia and Croatia, despite the established packaging collection system, the recycling trend is reversed from other countries. The declining recycling rate in Estonia is due to the high percentage of incineration of this waste for energy, while in Croatia this trend is the result of incomplete implementation of waste legislation, as well as insufficiently accurate reporting on packaging placed on the market.

Based on the above, it can be concluded that the deposit return scheme for the return of packaging is an effective system for intensively increasing the rate of packaging collection in the short term. Also, the system enables an increase in the recycling rate of plastic packaging, in cases when countries do not have large waste incineration capacities, as well as in cases when EU waste legislation is adequately implemented.

This is the first article in the series on plastics, and the following articles will deal with:

[3] The percentage refers to plastic, metal and glass packaging jointly.